Fara Faidzan, a recent graduate from Marymount Manhattan College in 2019 with a BA in Theatre performance minoring in Drama Therapy. 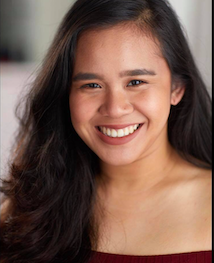 Fara Faidzan, a recent graduate from Marymount Manhattan College in 2019 with a BA in Theatre performance minoring in Drama Therapy. She was in two MMC Mainstages, ​Elektra​ as an ensemble and percussionist and​ Theatre Smash ​as an ensemble and percussionist. She received her Associates degree in Theatre Arts at Valencia College where she played roles such as​ Nicole the maid ​in Bourgeois Gentilhomme ​and was a puppet captain and puppeteer for an original production of Creation: The Birth of Mythology​.

She played the lead role of Callie from ​Stop Kiss ​in Breakthrough community theatre to commemorate the victims of the Pulse Shooting to show as a muslim woman she will not tolerate hate and violence towards others regardless of race, gender and sexuality.

She is also an experienced drummer/percussionist. She played MMC’s production of ​On The Town ​and is currently in various bands one called ​Evan Alexander Moore & The Hot Takes a​ nd ​Prince Johnny & The Kicks w​ hohosts monthly queer singer songwriter showcases here in NYC called ​The Troubadour Lounge.

​Her most recent work was Sidekick Production’s Batman musical parody called ​Birds and Bats ​as Damien Wayne and ​RaTs : Subway Songs and Stories ​as Rat Princess a workshop musical. You can find ​Birds and Bats ​the musical on youtube.